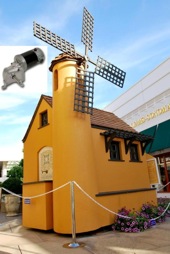 St. Charles, IL - July 23, 2009 - An elaborate playhouse featuring a Bison gearmotor powered windmill sold for $10,000 at auction, with one hundred percent of the proceeds used to provide free home repair services for the elderly and low-income homeowners in the San Francisco Bay Area. The "Molino of La Mancha" playhouse was designed by Topos Architects of Palo Alto, California, who selected a Bison Gear gearmotor to power the windmill on still days. The gearmotor Bison donated to the project is from the VWDIR23 series of right angle, variable speed drives.

The Don Quixote-inspired windmill was sold at the Dreams Happen auction which is the primary fundraiser for the Rebuilding Together Peninsula charity that provides free home repair services for those in need. The primary recipients of their services are senior citizens, single parents, grandparents raising grandkids, the disabled, low-income families with children, veterans, children caring for ailing parents and the sick or poor in health.

BisonCares is a 501(C)3 Nonprofit Organization "Powered by the hearts of Bison Gear employees." Initially established as a response by Bison Gear employees to the tragedy of hurricane Katrina, BisonCares has expanded its support to the Toys for Tots program, feeding the hungry in Northern Illinois, and other health research, education, social, religious and animal welfare efforts that improve the quality of life.